Summary Photo of No Summary

People have started asking us “how did it go?”. The past couple days we have been sorting through photos, interviews and online related articles/resources to U.A.F.A. We still can not sum it all up yet. We will say that being reminded any amendments or changes to D.O.M.A is NOT an instant over-ride to our immigration issue- is still hard to comprehend. But our fight to flight is not going anywhere (no pun intended).

It was pointed out by a few friends who had seen this photo, taken last week of US being interviewed, that our body language and the looks on our faces, sums up why we can not.

We are feeling much more relaxed and will have everything detailed for you in the next few days. We’re looking forward to sharing our experiences with you.

The teacher in Gary has to point out that we are being interviewed in front of Alexander Calder’s “Mountains and Clouds”. The observer in Sam needs to point out that Gary’s fear of heights prevented him from seeing the sculpture, which is much more striking viewed from above, and was after leaving a Senator’s office. As for US? We see the irony  🙂 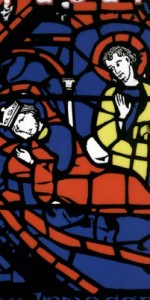